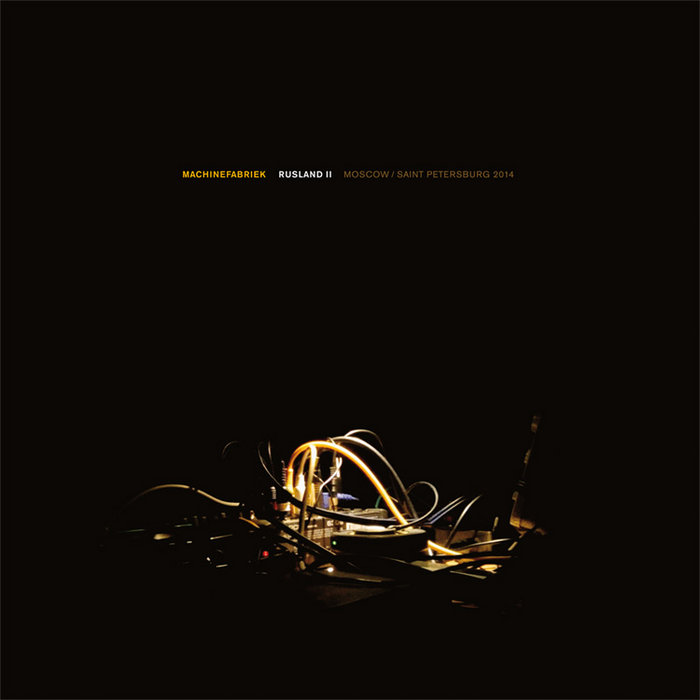 Background: "In 2007 I visited Russia for the first time as part of the festival Dutch Punch. Taking some night trains to visit Moscow, Saint Petersburg, Jaroslavl and Nizhny Novgorod, the whole experience was quite an adventure and it led to the CDR release 'Rusland', which was also compiled on the Veldwerk CD. I returned to Saint Petersburg in 2009 to perform with Wouter van Veldhoven at the Electro-Mechanica festival and to Moscow in 2013 to work on the score for Moscow Ballet choreography piece by Iván Pérez. In September 2014 I visited Russia for the fourth time to once again perform in Moscow and Saint Petersburg. The trip was arranged some time in July, just before I went off for a holiday. When I returned home I saw the stories emanating in the media about Russia allegedly shooting down an airplane over the Ukraine, killing the passengers onboard who were, in the main, Dutch. I thought that this incident and the turmoil that it stirred could make my visit to Russia quite difficult but in the end the organisers didn't mention it and everything went ahead as planned. The festival in Moscow, called SA))most'_10, was supposed to be on a ship called Brusov but the place was shut down by the local government a week before the event. Luckily, Egor, the organiser, had found a brilliant replacement in the form of the DI Telegraph, a huge industrial space that had been renovated to use for seminars and concerts. Another great thing was the PA, custom built by a company called Ampersound. The blue, yellow and red bass woofers, cabinets and tweeter cones looked like giant toys and they sounded absolutely incredible. My performance started a little earlier than originally anticipated because a few artists had cancelled and this news hadn't been communicated to me beforehand. All of a sudden my name appeared on the big screen and I had to hurry to my table, which was set up behind the audience. As usual my set was completely improvised. I started by simply rubbing and tapping a contact microphone, which caused enormous bass pops. Thanks to that huge sound system, this simple, tiny act became something incredibly visceral and physical. Normally I would hate an audience that was talking throughout a performance but for some reason, on this occasion, I could feed energy from it. When I had finished I really thought that I had played for about forty minutes. It was actually just twenty-two minutes, but people seemed to enjoy it and the typical Russian routine of autographs and photographs got underway. Really, that doesn't happen in any other place where I perform. While the organisers were cleaning up and dismantling the PA system, a guy called Dimitri kept me company. He confessed to me that he was tripping on LSD and that my music was a perfect soundtrack for it. He thanked me at least five times and enthusiastically waved two 12" records by a band called Cut Hands that he had just bought. I can't recall his exact words but there were comparisons between that music and my own. With the records still in hand, he took me to a club where I would later meet some of the event’s organisers again. The next morning a taxi brought me to the airport and while the driver could barely speak any English, he was able to understand that I make electronic music. "Jean Michel Jarre!" he yelled out. After landing in Saint Petersburg, the organiser Sergey and his wife picked me up. We drove to club DaDa, where the Fulldozer festival would take place that evening. This was definitely more of a rock concert kind of place. During the festival, Sergey and I decided to not play on the stage but to put our tables in front of it, punk-rock style. I started with a solo set, followed by a duo improvisation with Sergey on his modular synths. Like in Moscow, people were hunching over me and my equipment, some of them filming the performance with their smartphones. It's a strange experience and so different to what I'm used to but I felt very energetic. There was an excitement in the air that came through into the music. A mixture of these performances can be heard on the two collages that make up 'Rusland II'. It takes the gig from Moscow as the basic structure and supplements the best parts of the Saint Petersburg performance. There were two additional recordings I made with my phone, the first in the escalator of a subway station and the other of a telephone lady at Saint Petersburg airport. The main objective of 'Rusland II 'was to retain not only the energy of the concerts, but also the energy of the whole experience. The somewhat unruly audiences, the huge cities, all the travelling, its all part of it. 'Rusland II' is my memoir of my entire trip."